After the pseudo-failure that was my Sin City Flour Tortillas, I decided to try a different flour-based food: pita bread!

Making the dough was really easy – just mix some yeast, warm water, a little sugar, and let it sit for 10 minutes so the yeast has time to react. Add some salt, then add your flour, mixing it until you get a nice thing of dough. Knead it until it’s smooth and elastic. Put it in an olive-oil coated bowl, and cover – let it sit for 90 minutes, as it rises.

After that, punch out the dough for a bit, then cut it up into eight pieces, and make round balls. Let those rest for 15 minutes, as you head up your oven to 500 degrees. Then, roll them out thin (but not too thin, as I discovered), and then pop them in the oven for a few minutes! 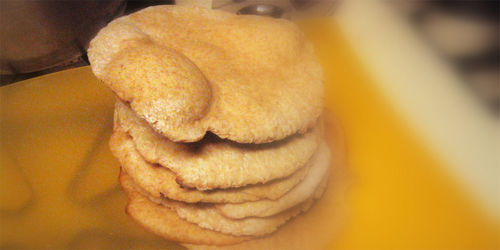 Tastes good! I might add a tad more salt, and I need to figure out the best way to get it to puff up nicely – but hey, it’s bread! Next up, hummus!