This morning I went over to the NBC Studios in Burbank to talk with composers Mark Kilian and Paul Hepker, about their work on the Oscar-nominated South African film, Tsotsi. They were there to play keyboards for South African artist Vusi Mahlasela, who is performing on tonight’s broadcast of “The Tonight Show with Jay Leno”. 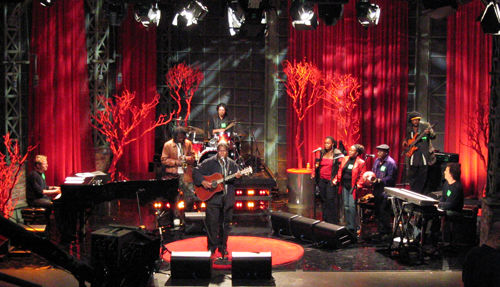 I’d never been to the studio before, so it was pretty neat to see how small it was. It was also amazingly cold in there – I guess they didn’t want people to sweat when on stage, and it probably gets warmer with a few hundred audience members, too.

I interviewed Mark and Paul to talk about their work on the film, for my SoundtrackNet Podcast – which is now up. When I was leaving, I did notice that one of the Green Rooms had a door opened, and inside were two people, with some animals. Apparently the “main” guest on the show was to be “Julie Scardina with Sea World Animals” – and there she was, with a sloth and a baby sloth. So cute, but bizarre creatures. I got to feed the mama sloth some lettuce – it was cool!