All I need now is my Batman Forever soundtrack to be signed by Elliot Goldenthal, and I’ll have a complete collection of signed Batman feature film soundtracks! (Well, not counting the 1960’s Nelson Riddle film score.) 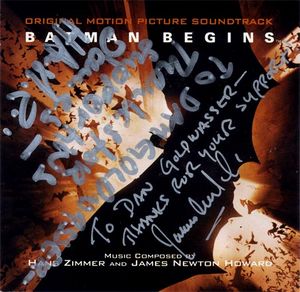 Ah, what a good sense of humor Hans has!

* I had put a PostIt note on the cover for James which said “Sign for Dan Goldwasser”, not realizing that he would actually sign it to me with my full name!
**Apparently Hans did the same since he saw how James did it.