After lunch we went to the Israel/Lebanon border, at the tourist site called “The Good Fence”. Built in 1976, this particular border crossing was used to promote humanitarian efforts and provide medicine for the people of Southern Lebanon who were fighting against the PLO. Apparently there was a nice little visiting center and everything, but that was shut down in 2000 once Israel withdrew from Lebanon. We didn’t know that.

So we follow the clearly marked official Israeli tourism signs to “The Good Fence”. We keep driving down the road. We pass an empty checkpoint that says “Warning: Border Ahead”, but it
was empty. So we figure it must be ahead. We get to a point where we can clearly see the Lebanese town that is across the border, and are wondering if this was right. 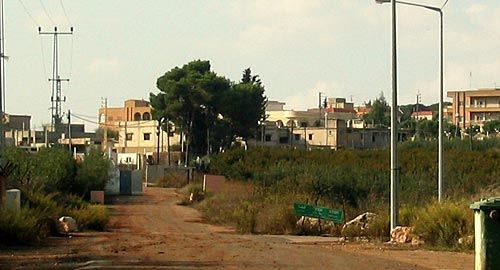 So we go back, and pull into this area that looked like it should have been the visitor center – in fact, there was a sign. But it seemed a tad dilapitated, and there was also a broken gate. Hmm.

So we get out of the cars, and go over to where some symbolic flags are – covered with weeds, near some barbed wire. Obviously, this didn’t seem quite kosher. Just looking around, it was clear that we were pretty damn close to the border, and not exactly in a tourist area. But yet, this was The Good Fence center. 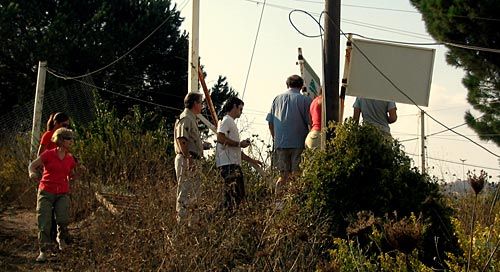 I heard loud engines in the distance, and figured that the Israeli Army was alerted to our presence. I was right, and two jeeps shows up in short notice.

I don’t speak Hebrew, but I was told that the gist of the conversation that ensued was simple: “You really shouldn’t be here. Hezbollah is right over there, and you are strongly urged to leave.”

And so we did.