This afternoon I moderated a composer panel at the “Fangorial Weekend of Horrors” convention, in Burbank. I’ve never been to a convention before (except for SIGGRAPH and MacWorld, which are very very different), so I was expecting something like a crazy Star Trek convention, without the sci-fi element. Indeed, it was exactly as I thought it would be – horror nerds everywhere. It was actually rather amusing. This photo says it all: 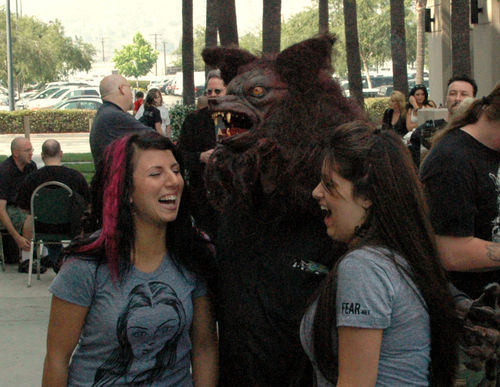 The panel itself was good – I had six composers to handle, and while I had a bit of a nervous start (I haven’t spoken in front of a few hundred people before), things started going smoothly once the panel started discussing things. It ended up turning into a bit more of a discussion about the ups-and-downs of film scoring in general, with not as much emphasis on horror, but there were still some good moments. We even ran over our time (some of the panelists really can wax poetic!), so I didn’t get to open the panel up to Q&A. Overall, it was fun to do, and a good first-time moderating. As I do more of them, I’m sure I’ll improve.