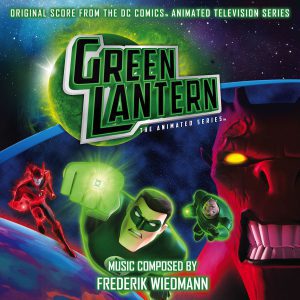 I’ve known Frederik Wiedmann for years, starting back when he was an assistant to composer John Frizzell.  Watching his career blossom has been very cool, and I was thrilled that La-La Land Records was able to release a soundtrack album to his music for the new Cartoon Network show, Green Lantern: The Animated Series.  I didn’t have any involvement with the project, aside from recommending Freddie and his music to the La-La Land guys, and doing the art direction.

Working with Warner Bros. Animation is great – everyone over there is super-helpful when it comes to finding assets and art material for a project, and while Green Lantern is not technically my first project with them, it’s the first one to actually get finished and released. The cover art came from the home video cover assets, and the disc art (which I’m amazed we were able to use) is really sweet shield image that came from the Style Guide package.  The music is really great stuff, and worth checking out!