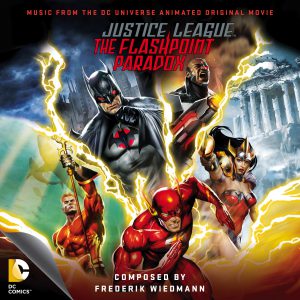 Freddie Wiedmann was pretty happy with my work on the Green Lantern: The Animated Series albums, and so I was excited that I got to work with him again, this time on the very dark, very violent DC Universe Animation Original Movie, Justice League: The Flashpoint Paradox.

The first challenge with the artwork was figuring out what stills we had.  Since this was an animated film, there are no actual ‘photos’ to use – instead, I had to watch the film with burned-in timecode, and mark down the frames I wanted sent to me.  Those frames were 1080p resolution – nicely HD, but not exactly fully print resolution.  Some of them had to be upscaled, many had to be brightened, and in some cases, I actually created panoramas based on frame sequences!  The second – and biggest – challenge was the cover.  It was a complex layered Photoshop file that was (appropriately enough) rectangular, and tall.  But since this was for a square album cover, I needed to figure out how to re-position elements to open up the width of the frame.  It was a bit tricky, but I think it turned out alright.  Also, I had attended the string session earlier int he year, so was fortunately able to integrate some of the photos into the artwork, showing Freddie and his team at work.  It’s a really dark score, full of themes, action, and emotion, and I recommend you check it out!