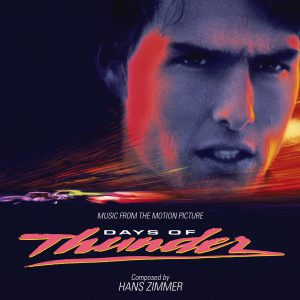 Days of Thunder features a pretty kick-ass score by Hans Zimmer, which was strangely never released.  The 1990 car racing flick features a power-anthem score with rock elements and emotional beats, and a really catchy theme, which was adapted into the song “The Last Note of Freedom”, which Zimmer wrote with Billy Idol.

The audio assets for Days of Thunder came from analog tapes in the Paramount archives, which were transferred by Johnny Dee Davis at Precision AudioSonics.  I then cut up the assets, organized them, and started to line them up to the film, to make sure we had everything.  And we didn’t.  We didn’t even have the final race, the climax of the film!  Reaching out to the wonderful folks at Zimmer’s studio, Remote Control Productions, they were able to track down additional assets, including some alternate mixes, overlays and the missing tracks.

Once the album assembly was locked down, I started in on the artwork, making sure to use the same skewed Univers font that was featured in the key art and marketing materials, for consistency. Director Tony Scott was sadly no longer with us, and so liner notes writer Tim Greiving reached out to – and was amazingly able to lock down interviews with – producer Jerry Bruckheimer and writer/actor Tom Cruise.  Suffice it to say, when those two Hollywood power-player signed off on the artwork, I was very happy.  You can check out the artwork here, and get the album from La-La Land Records today!