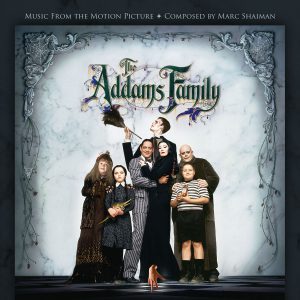 I’ve always loved Marc Shaiman’s delightfully fun score to The Addams Family.  The thematic score is immensely hummable, and when it was clear that we were able to do a new expanded soundtrack release of the music, I immediately dove right in.  We got the bulk of the music from DATs, but there were a few cues that were on analog sources which we had transferred.  What that meant was that we not only had the full score, but we also had some exciting bonus material to work with, including Shaiman’s original synth theme demo!

The big musical number in the middle of the film, “The Mamushka”, was available to us with a few different mixes.  We used the final mix, naturally, but I felt that a fun bonus track would be to provide the song as an instrumental, without the vocals.  To that end, I worked with the multi-track stems to create a new mix, closely following Dennis Sands’ original mix as best I could.  I also had to create a new mix of the original trailer music that Shaiman wrote, since there was no final mix from the 16-track source. Again, I’m rather pleased with that one, and you can watch the trailer here:

On the artwork side of things, I recreated the original album cover artwork as best I could, using the scanned sources provided by Paramount Pictures’ archives. Inside the book, I framed the photographs with a stylistic border, befitting the gothic nature of the Addams family. For the headers, I used a decorative font based on Charles Addams’ handwriting, which was used not only in The Addams Family, but subsequently used by director Barry Sonnenfeld on his Men in Black films.  Check out the artwork here!